RV users (especially the newbies) usually get overwhelmed by or confused at the terms and abbreviations associated with vehicle weights such as GVM, GCM, ATM,  axle load, etc. Why? Because there are a lot of them! Moreover, some of these are critical terms you need to know to keep your RV safe for use. That is why through this post, I’ll help you understand these terms in an easier manner.

But wait… why should you know these by the way?

The relevance of weight terminologies

First is that some important terms – GVM and ATM, for example – define the exact Australian standards you must comply with, how much stuff you can put in your RV, and how much you should tow.

And second, which is an effect of the first, you can avoid putting your vehicle at risk (by overloading, for instance).

So in this blog, I have presented (at least in an easier way) the terms related to weight ratings of RVs and caravans only. Therefore, I did not include weight terminologies (and definitions) specific to other vehicles. Consequently, the term “trailer/s” here applies to caravans as well.

On the condition that the trailer is NOT attached, the ATM is the sum of the following:

As much as GVM is important for motor vehicles, so is ATM to trailers.

This term is relevant to determine different axle loads. Axles are grouped in the following manner: 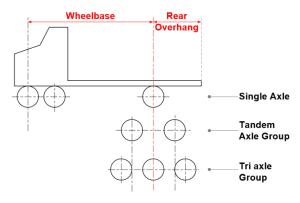 Hence, an axle load is the total load (or weight, if that helps you understand better) carried by the road as a result of the weights transferred by the tyres attached to that axle.

Also, the centres of the wheels of that axle must be less than 1 metre apart to be classed as a single axle.

You can establish your RV’s carrying capacity by the sum of the following:

The maximum allowable load per axle. The manufacturer defines this value.

“Combination” means the setup consisting of a towing vehicle and the trailer it tows. With that in mind, you can better understand the GCM as the sum of the following:

The manufacturer specifies the GCM.

Hitch first the trailer before calculating for the GTM in accordance to this equation:

A – mass of the unladen trailer

B – the maximum trailer load recommended by the manufacturer

The maximum allowable mass of the vehicle when it is laden. The manufacturer specifies this value.

This value is extremely important as it is the main deciding factor whether a certain rule is applicable to your vehicle.

It’s simply the mass of the vehicle and its current load – be it passengers, luggage or others.

The mass of an unladen vehicle equipped with the following:

* In the case of a vehicle in the form of a “cab and chassis” applying for compliance to ADR 35/xx, place an additional load of at most 7.5% of the GVM, such that its centre of gravity is within 200mm of the load centre designated by the manufacturer.

LTM is the mass of a laden trailer that is loaded in a manner that each of its axle groups is at its specified GGALRs.

Its value is at least 13.5kg per seating position unless otherwise recommended by the vehicle manufacturer.

It is simply the value designated by the vehicle manufacturer as the “loaded test mass” of the vehicle. However, this value must at least be equal to the sum of the masses of the following:

In the case of trailers complying with ADR 38/xx, the MLTM is the mass of a trailer loaded to its GTM while its axle loads being within the manufacturer’s specified individual GALRs.

In the case of vehicles complying with ADR 35/xx, the MLTM is the mass of a laden vehicle that’s loaded to its GVM without exceeding the manufacturer’s specified individual GALRs.

In the case of RVs and caravans, it is the same as the GVM or GTM

In the case of RVs and caravans, it is equal to:

The payload is equivalent to the GVM minus the Tare Mass. In simple words, it is your “allowance” on how much (in terms of weight) passenger and stuff you can put in your vehicle.

The three main weights that matter the most in a vehicle are:

It is critical to ensure proper distribution of payload over all the axles of the vehicle. Under or overloading axles loads can result in poor vehicle preformance and handling characteristics, and is some case cause accidients.

Discussing payload distribution is important because it affects how seats, equipment and facilities must be located within your vehicle. So it’s a critical factor to consider both when modifying or building your RV and when loading it up for your trips, so be cautious.

The maximum mass by which an axle group can exert on the ground such that it causes a retractable axle to automatically go fully down.

The rated towing capacity is the value that’s lesser of these two:

In simpler words, it is the maximum weight which the towing vehicle must tow. Although data on rated towing capacities are readily given by the manufacturer, the overall towing capacity of a combination may change.

It is the sum of the masses of the following:

In fact, the above is only one way to determine your reference mass. Another option is to use the manufacturer’s estimated mass.

It is the mass of the vehicle when unladen and ready to hit the road. To be more specific, the vehicle must be equipped with all:

TCM is the mass of the towing vehicle plus that of the (laden/unladen) trailer.

TTAL is the sum of the forces exerted by each axle attached to the trailer, provided that the trailer is statically on a horizontal plane.

The sum of the GALRs of all a trailer’s axles.

The mass of the vehicle in running order unoccupied and unladen with all fluid reservoirs filled to nominal capacity including fuel, and with all standard equipment.

The UTM is the mass of the trailer when under the following conditions:

Vehicle Maximum Load on the Tyre

Conduct the following steps in order to determine the vehicle maximum load on a specific tyre:

Vehicle Normal Load on the Tyre

You shall calculate this by performing the same procedure as that for the Vehicle Maximum Load on the Tyre. Although for step 1 you should distribute the Normal Loaded Vehicle Mass instead.

Indeed, there are a handful of weight terms that must be known especially when applying for compliance to the ADRs. Nevertheless, RV owners and users can opt to master instead just the most essential terms such as GVM, GTM, GCM, laden/unladen mass, load capacity and tow-related terms.

So there, I hope I was able to serve my purpose of helping you grasp a better understanding of the term/s you wanted to know more about. But let me grab this opportunity as well to let you know that I do offer expert services (as part of CVC) on vehicle modifications and compliance certifications. So in case, you would like to verify if the change you’ve done to your RV/caravan does not affect its current compliance, then give me a call or leave a quick message.

Looking for grounds to claim a tax deduction in your RV, the most common one is as a result of renting it out. Others include expenses incurred from using your RV for work or for a primary residence....

Continue Reading
link to How Often Do You Need to Change Caravan Tyres?

There are three short answers to this. First, check your Owner's manual and follow any manufacturer’s recommendation if applicable. Second, change all caravan tyres that are over 10 years old...